A Hotbed of Literary Talent 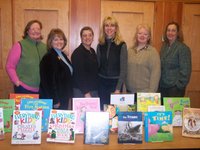 Did you know that NH is a hotbed of literary talent? Last night the Nesmith Library hosted a booksale and signing featuring six NH children's writers. From Salem, there was Kurious Kitty's alter ego, Diane Mayr. Diane has published four books and is looking forward to next fall when Run, Turkey, Run! will be released. Bedford's Muriel Dubois is the author of two books about famous NH people, Abenaki Captive, a story about John Stark's early life, and the just released, To My Countrywomen: The Life of Sarah Josepha Hale. Sarah Hale was the author of "Mary Had a Little Lamb," the first American woman editor of a magazine, "Godey's Ladies Book," and hailed from New Hampshire. Both Muriel, and Kathy Deady of Manchester, have published a gazillion nonfiction books that are found in school libraries around the country. Kathy's latest picture book is All Year Long, a delightful romp through the seasons. Janet Buell, from Goffstown, recently published Sail Away, Little Boat, a lyrical picture book celebrating nature. Sadly, Janet's series on bog bodies, ice maidens, and other gruesome topics, is no longer in print. Andrea (Andy) Murphy is the author of Out and About at the Dairy Farm. Andy used a NH dairy run by women farmers as the model for her informational book. Andy recently adopted two puppies, so we are looking forward to the picture books that will undoubtably be forthcoming! Jennifer Ericsson, from Concord, has published many delightful picture books including She Did It!, the story of a family of girls. One of the advantages of a large family is always having someone else to blame!

If you missed last night's signing, you can come down to the library and borrow the books written by these fabulous women.
Posted by KURIOUS KITTY at 12:25 PM