Written Works of Art about Art

I think it's rather interesting how writers can revolve a whole work of fiction around a work of art.

Take for instance, Arturo Perez-Reverte's The Flanders Panel [F PER]. The panel is a Flemish painting that is being cleaned by Julia, an art expert. Julia discovers, through an x-ray, the words, "Who killed the knight?" Oooh...you know there's a mystery that's going to unfold! 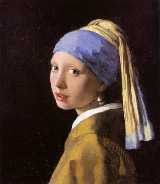 Then there's the short, but very popular book discussion group choice, Girl with a Pearl Earring, by Tracy Chevalier [F CHE, also in a film version DVD GIR]. In this novel Chevalier weaves a story around Vermeer's portrait's subject, a young woman who works as a maid in his home.

The real work of art has its own website, too, The Girl with a Pearl Earring: An In-Depth Study.


A recently published novel is Leonardo's Swans by Karen Essex [F ESS]. This book, too, is a story about the models for a work. The publisher describes it this way, "LEONARDO'S SWANS is the story of the powerful Este sisters, Beatrice, Duchess of Milan, and Isabella, Marchesa of Mantua, as they compete for the affections of Italy's most influential prince, the Duke of Milan, and for the larger prize, to be immortalized in oil by his court painter and engineer, Leonardo da Vinci."

Sir, 'twas not
Her husband's presence only, called that spot
Of joy into the Duchess' cheek

Might I suggest a visit to one of our local art museums? Borrow one of the library's passes. Wander the galleries and peer into the worlds created by great artists. Perhaps you'll be inspired to create a story, too!
Posted by KURIOUS KITTY at 12:32 PM