Yesterday, the Library of Congress announced the appointment of the new U.S. Poet Laureate, W.S. Merwin. Merwin replaces Kay Ryan who has served for the past two years.

The author of more than 30 books of poetry and prose, Merwin’s influence on American poetry is profound. Often noted by critics is his decision, in the 1960s, to relinquish the use of punctuation. "I had come to feel that punctuation stapled the poems to the page," Merwin wrote in his introduction to "The Second Four Books of Poems." "Whereas I wanted the poems to evoke the spoken language, and wanted the hearing of them to be essential to taking them in." 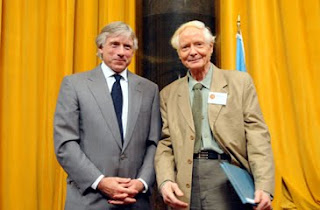 W.S. Merwin (right) accepting the 2009 Pulitzer Prize for Poetry for The Shadow of Sirius

On the Library's shelf we have two of Merwin's collections,Migration: New & Selected Poems and The Shadow of Sirius [both 811.54 MER].

For today I'd like to offer this Merwin poem from The Shadow of Sirius. I think it is the perfect poem for Merwin's first days on the job!

The Poetry Friday Round-Up is taking place at The Poem Farm.
Posted by KURIOUS KITTY at 12:02 AM