I've set this, and tomorrow's post, to publish in my absence. I'm headed to the far northern part of the state, a.k.a. known as "Moose Alley," for a few days of R & R.

I thought I'd look to see what we have that covers the north country's colorful past, most notably, the short-lived Republic of Indian Stream. For three years, 1832 to 1835, there was a bit of disputed land between the United States and Canada, which resulted in the citizens of the area being taxed by both nations! Not ones to be taken advantage of, the citizens essentially broke from both nations until the two countries came to an agreement! 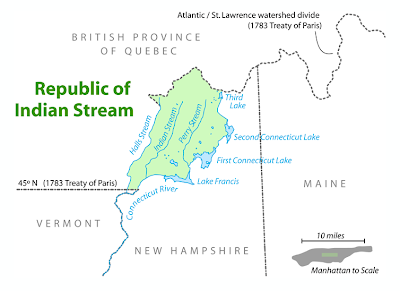 We have a brief history of the territory in The struggle for the Indian Stream Territory by Roger H. Brown [R 974.2 BRO], or, you can check out the Wikipedia article here for more information. We also have a historical novel dealing with the Republic. It's Lost Nation by Jeffrey Lent [F LEN], and is described by the publisher thusly:

Impelled by sensuous prose and atmospheric storytelling, Lost Nation delves beneath the bright, promising veneer of early-nineteenth-century New England to unveil a startling parable of individualism and nationhood.

The novel opens with a man known as Blood, guiding an oxcart of rum toward the wild country of New Hampshire, an ungoverned territory called the Indian Stream—a land where the luckless or outlawed have made a fresh start. Blood is a man of contradictions, of learning and wisdom, but also a man with a secret past that has scorched his soul. He sets forth to establish himself as a trader, hauling with him Sally, a sixteen-year-old girl won from the madam of a brothel over a game of cards. Their arrival in the Indian Stream triggers an escalating series of clashes that serves to sever the master/servant bond between them, and offers both a second chance with life. But as the conflicts within the community spill over and attract the attention of outside authorities, Blood becomes a target to those seeking easy blame for their troubles. As plots unravel and violence escalates, two young men of uncertain identity appear, and Blood is forced to confront dreaded apparitions of his past, while Sally is offered a final escape.

Lost Nation is a vivid tale of unexpected strengths, terrible and sad misconceptions, and the yearning toward civil society in a landscape raw and with little pity for human strivings. In prose both lucid and seductive, it carries us deeply into human and natural conditions of extreme desolation and harrowing hardship, but also the relentless beat of hope and, finally, the redeeming capacity of love.

Something tells me I should bring this book along for a little lakeside reading!
Posted by KURIOUS KITTY at 9:00 AM