Poetry Friday--Today at the Bluebird Cafe 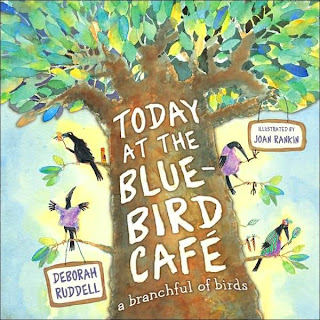 One of the things I miss during the winter months is the birdsong every morning. When it starts up again in the spring, it is always a joyful time for me. So, to make up for the lack of birds in the real world of wintery New Hampshire, I decided to look at the children's book, Today at the Bluebird Cafe: A Branchful of Birds by Deborah Ruddell, illustrated by Joan Rankin (J 811.54 RUD).

The book covers a variety of birds, including a few, like the penguin and the hoopoe, that are not going to be found in the typical NH backyard. Still, there are plenty of birds that are recognizable to most. Here's one who doesn't exactly sing, but who's voice is recognizable all year long:

Blue as a bruise
on a swollen knee,
ruling the world
from a maple tree.

Squawking out orders,
getting his way,
hogging the feeder,
and having his say.

Raising a fuss,
causing a flap,
a flying complainer
in need of a nap.

Adults might wish to pick up the anthology,
Bright Wings: An Illustrated Anthology of Poems about Birds [821 BRI] to get their fill of bird songs. (I looked at Bright Wings back in March when it was first released.)

Fly over to Live. Love. Explore! to see Irene for this week's Poetry Friday Round-Up.
Posted by KURIOUS KITTY at 12:01 AM