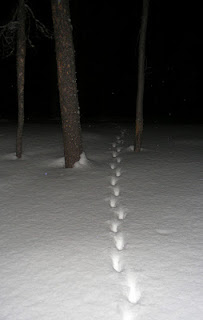 At the Academy of American Poets site, POETS.org, there is a short piece about Robert Frost's "Christmas Cards," which were actually Christmas chapbooks printed by Spiral Press from 1929 to 1962. What a fabulous gift it would have been to receive one! Read the article here. (Don't get too excited if you're headed down to Manhattan in the next month--the exhibition that the article is promoting took place three years ago!)

The Poetry Foundation's bio of Robert Frost lists the poems that Frost included in his Christmas Cards.

The poem Frost selected for the 1948 card is "Closed for Good." Two versions of it appear in Frost: Collected Poems, Prose & Plays [811 FRO]. I'm not sure which version was included on the card, but I've chosen the second one which is an abbreviated version of the first (the opening stanza was eliminated):

They come not back with steed
And chariot to chide
My slowness with their speed
And scare me to one side.
They have found other scenes
For haste and other means.

They leave the road to me
To walk in saying naught
Perhaps but to a tree
Inaudibly in thought,
"From you the road receives
A priming coat of leaves.

"And soon for lack of sun,
The prospects are in white
It will be further done
But with a coat so light
The shape of leaves will show
Beneath the brush of snow."

And so on into winter
Till even I have ceased
To come as a foot printer,
And only some slight beast
So mousy or so foxy
Shall print there as my proxy.

Stop by Jama's Alphabet Soup for a healthy serving of Friday poetry!