On this day in 1856, L. Frank Baum was born in Chittenango, New York. Baum was, as everyone probably knows, the author of The Wonderful Wizard of Oz [J BAU].

Baum died in Hollywood, CA in 1919. This was long before the book was made into a big Metro-Goldwyn Mayer musical production, The Wizard of Oz [DVD WIZ]. 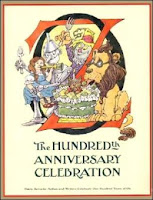 The Wonderful Wizard of Oz was first published in 1900, and, in 2000, Oz: The Hundredth Anniversary Celebration [J OZ] was issued in commemoration. It contains essays and illustrations by 30 children's authors and illustrators. The cover illustration is by the late, Maurice Sendak!

Also released in 2000, was The Annotated Wizard of Oz: The Wonderful Wizard of Oz [F BAU].

The "Wonderful Wizard of Oz" is the quintessential American fairy tale, but it is also a controversial children's book.

This annoted edition illuminates the numerous contemporary references, provides character sources, and explains the actual meaning of the word "Oz". A facsimile of the rare 1900 first edition appears with the original drawings by W.W. Denslow, as well as 25 previously unpublished illustrations. There is a bibliography of L. Frank Baum's published work, every notable "Oz" edition and the stage and cinematic productions from 1939's "The Wizard of Oz", to the 1974 Broadway hit "The Wiz". --Publisher's description.

If you're going to be anywhere near Baum's birthplace on May 31, you should be sure to attend this year's Oz-Stravaganza!