Earlier in the week, NASA's "Image of the Day" was this amazing photo they called "The Rose." 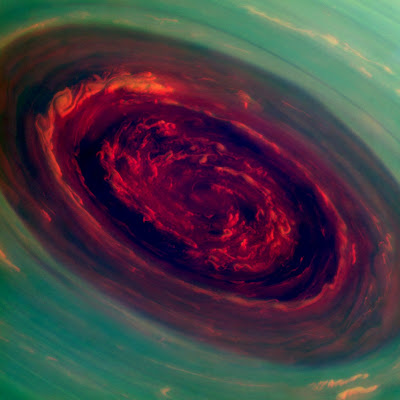 Image Credit: NASA/JPL-Caltech/SSI
Thinking about how NASA uses the familiar (a rose) to make the unfamiliar ("the spinning vortex of Saturn's north polar storm") more accessible to the general public, puts me in mind of the stories the ancients developed to explain the unexplainable. For example, the constellation we know as the big dipper, has other names dependent upon the culture explaining it. Wikipedia has an extensive article that explores the names of the big dipper, click here.

Many children's books illustrate celestial phenomena. There's Legend of the Milky Way by Jeanne M. Lee [JP LEE], which retells a Chinese legend, or Her Seven Brothers, a Cheyenne tale of the big dipper, retold by Paul Goble [JP GOB].

And, look for the CD by Tickle Tune Typhoon, Singing Science [CD CHILDREN TIC], which has a catchy little tune called, "Constellation Cowboy."
Posted by KURIOUS KITTY at 9:00 AM