On this day in 1863, President Abraham Lincoln gave his stirring Gettysburg Address.

There are no pictures of Lincoln giving the speech, but there are pictures of the crowd taken that day. Here's the famous Bachrach photo: 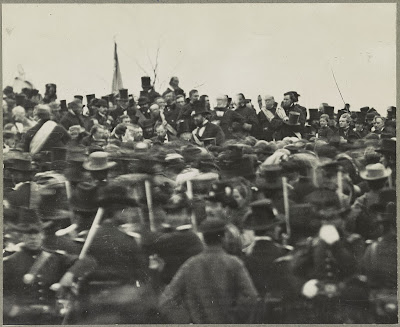 I've cropped the photo to pinpoint Lincoln's location. He's hatless and wearing a sash. I believe his son, Tad, is the boy standing next to him. Tad often dressed in a uniform. 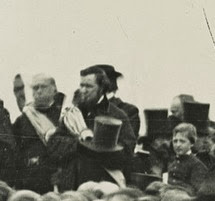 Documentary film maker, Ken Burns, has initiated a "Learn the Address" project in which he is collecting videos of Americans reciting the Gettysburg Address. People from all walks of life are participating, and so can you. Learn how here.

Here's mix video to inspire you:

We have these books on the Gettysburg Address, two for adults and one for kids:

As with any historical event, a certain mythological status has been given to the event. Read about it here.
Posted by KURIOUS KITTY at 5:00 AM