A few weeks back, NPR ran a post about a cartoonist, Mike Holmes, who owns a cat named Ella. Holmes has drawn himself and Ella in the style of several different cartoonists. One is Bill Watterson, creator of "Calvin and Hobbes." 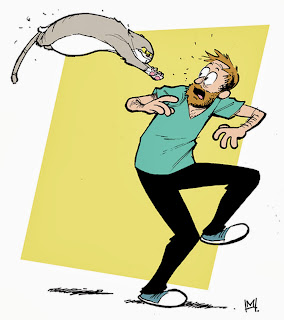 Several other examples may be seen here. Holmes has his own blog, at mikeholmesdraws.com.

Since the advent of Japanese comics (manga and anime), the interest in cartooning has been revived, especially amongst teens and young adults. If you're interested in getting started in cartooning, you could begin with these:

The Library also has a teen Anime Club that will be meeting on Thursday, January 16, at 4:30. For more information, call 432-7154 and ask for Mrs. Brikiatis.