Aimless Love: New and Selected Poems is the latest collection by Billy Collins [811.54 COL]. Collins is a poetry rock-star, if there is such a thing. Next to Mary Oliver, he is probably the best selling contemporary American poet. That is really faint praise, since if you asked the man-on-the-street, "Who is Billy Collins?", I'd bet you might get one out of a hundred who would say, "A poet." That's too bad, because his poetry is really accessible. What makes it accessible? Reading one of his poems is like Collins is sitting at a kitchen table and having a conversation with you. 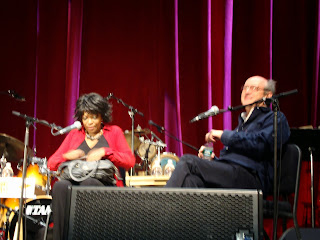 Photo of Rita Dove and Billy Collins taken by me at the Dodge Poetry Festival in 2010. If you disregard the stage setting, you can imagine they're just sitting around having a conversation. Due to my distance from the stage, that's about as clear an image as was possible!

One bright morning in a restaurant in Chicago
as I waited for my eggs and toast,
I opened the Tribune only to discover
that I was the same age as Cheerios.

Indeed, I was a few months older than Cheerios
for today, the newspaper announced,
was the seventieth birthday of Cheerios
whereas mine had occurred earlier in the year.

Already I could hear them whispering
behind my stooped and threadbare back,
Why that dude’s older than Cheerios
the way they used to say

Why that’s as old as the hills,
only the hills are much older than Cheerios
or any American breakfast cereal,
and more noble and enduring are the hills,

I surmised as a bar of sunlight illuminated my orange juice.

Wasn't that fun? For more poetry fun, head over to Keri Recommends for the Poetry Friday Round-Up.