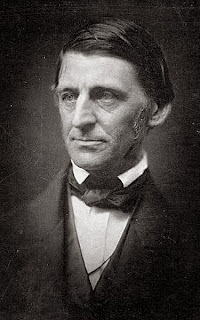 Ralph Waldo Emerson was born on May 25, 1803 not far from here in Boston. His name is forever associated with that of Henry David Thoreau, Transcendentalism, and the literary community of Concord, MA. I'll bet you had to read an essay or two of Emerson's back in your high school or college American lit courses, but, did you know that Emerson was also a poet?

One "Library of America" volume collects Emerson's poems in Collected Poems & Translations [811 EME], here's one that I like for its simplicity and for the fact that it speaks to the poetic soul:

Think me not unkind and rude,
That I walk alone in grove and glen;
I go to the god of the wood
To fetch his word to men.

Tax not my sloth that I
Fold my arms beside the brook;
Each cloud that floated in the sky
Writes a letter in my book.

Chide me not, laborious band,
For the idle flowers I brought;
Every aster in my hand
Goes home loaded with a thought.

There was never mystery,
But 'tis figured in the flowers,
Was never secret history,
But birds tell it in the bowers.

One harvest from thy field
Homeward brought the oxen strong;
A second crop thine acres yield,
Which I gather in a song.

I'd be lying if I said I like Emerson's poetry. Much of it is long and tedious. It swims in flowery language and literary allusions, however, there are some of his shorter poems, quatrains, and ones labeled "mottos," which are more to my liking.

Head over to Violet Nesdoly / poems for this week's Poetry Friday Round-Up.

Photo courtesy Wikipedia.
Posted by KURIOUS KITTY at 12:00 AM