Poetry Friday--Take Me Out to the Ballgame! 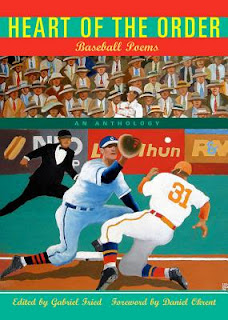 In time for the 2014 season, we've added a newly published book called Heart of the Order: Baseball Poems: An Anthology edited by Gabriel Fried [811.008 HEA]. The back covers tells us, "Here are more than 70 of the best poems ever written about baseball." It's compact little paperback that would fit nicely in a pocket, ready to be pulled out and read between innings.

Do you want to know the best thing about this anthology? It DOES NOT include "Casey at the Bat"! May Swenson's "Analysis of Baseball" and Gail Mazur's "Baseball," both of which have seen a lot of exposure, deserve to be included, whereas Casey's time has come and gone.

The one I'd like to share celebrates the imagination and the dreams of many a young person.

I once hit clothespins
for the Chicago Cubs.
I'd go out after supper
when the wash was in
and collect clothespins
from under four stories
of clothesline.
A swing-and-a-miss
was a strike-out;
the garage roof, Willie Mays,
pounding his mitt
under a pop fly.
Bushes, a double,
off the fence, triple,
and over, home run.
The bleachers roared.
I was all they ever needed for the flag.
New records every game--
once, 10 homers in a row!
But sometimes I'd tag them
so hard they'd explode,
legs flying apart in midair,
pieces spinning crazily
in all directions.
Foul Ball! What else
could I call it?
The bat was real.

Elizabeth Steinglass has the Round-Up honors this week. I'd be willing to bet there's a baseball poem or two being shared in today's Poetry Friday offerings.