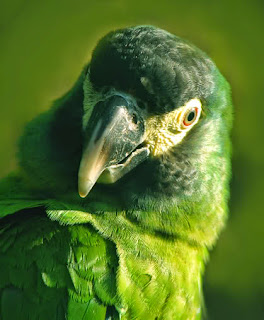 Today is the official international celebration known as Talk Like a Pirate Day! Are you wearing your peg leg and your eye patch and are you aaarr-ing and avast-ing?

A pirate's best friend (and probably his only friend) is his parrot, so, in honor of piratical parrots everywhere, I'm sharing a poem by James Merrill, from Collected Poems [811 MER]. As you read it, imagine the old woman as an old lady pirate!

I am impatient of the myth that numbs
A spinster as she hums
Sweet nothings to her parrot in its cage.
The haggard eye set in white crinkled paint
Meeting her eye over the cracker crumbs
Tells much about old age
Beyond what is serene or quaint.

Our revels now are ended, pretty Poll,
For midnight bells extol
The individual face behind the mask.
Each dancer seeks his partner to embrace
As if he had seen deep into her soul
And gave what is dared ask,
While knowing but a woman's face.

As she grew older, old, it was to sense
A sad irrelevance
About the Moment she had so long wanted,
When mask did matter least, and face did tell
More than it knew of private riches, whence
Came surely the enchanted
Eye, the enchanting syllable.

Think how the parrot masked always not young,
Selecting as from dung
The oaths and greetings she let fall when most
She suffered or felt joy was possible,
Destroys the personal with its gray tongue,
That frail and talkative ghost
A bird of utterance can dispel;

Speaks with no human voice, which is pretense
Of gentleness and sense.
Against such masks, it ancient cry awoke
Jungles within her, sunsets of its flight,
Being the music that informed her dance
Until all music shook
To stillness in the bestial night.


Admittedly, I have no idea what it all means, but I like the way it sounds! Shiver me timbers, it's now time to be heading over to The Poem Farm where Amy is holding the Round-Up.