Edgar Allan Poe Back In Boston!

A new statue of Edgar Allan Poe was unveiled this week in Boston. Poe spent a brief period in Boston--the first two years of his life, but that's enough for us to stake a claim on him as a New Englander!

Poe wasn't fond of Boston, the reasons why are discussed in an article on the unveiling, which was published in The Boston Globe on Sunday. 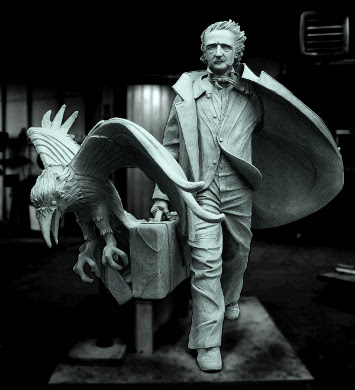 The statue is the work of Stefanie Rocknak, and shows Poe as a confident and determined individual striding through Boston. It also has the obligatory raven!

Model of the statue courtesy the Edgar Allan Poe Foundation.
Posted by Diane Mayr at 9:00 AM