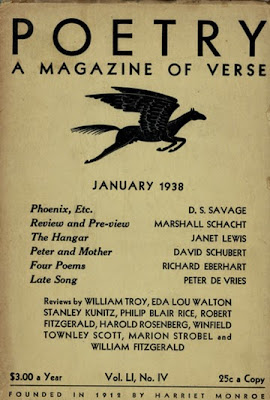 New Hampshire poet, Richard Eberhart, had lived over 100 years when he died in 2005. In that time I'm sure he had many days when he wished for the time "when everything is as it was in my childhood." Don't we all wish that on occasion?

If I could only live at the pitch that is near madness
When everything is as it was in my childhood
Violent, vivid, and of infinite possibility:
That the sun and the moon broke over my head.

Then I cast time out of the trees and fields,
Then I stood immaculate in the Ego;
Then I eyed the world with all delight,
Reality was the perfection of my sight.

And time has big handles on the hands,
Fields and trees a way of being themselves.
I saw battalions of the race of mankind
Standing stolid, demanding a moral answer.

I gave the moral answer and I died
And into a realm of complexity came
Where nothing is possible but necessity
And the truth waiting there like a red babe.

Eberhart was United States Poet Laureate 1959-1961. You can read a sampling of his work in The Poets Laureate Anthology [811.5 POE].

Michelle at Today's Little Ditty is hosting this week's Poetry Round-Up. Stop by!