What the Lion Ate 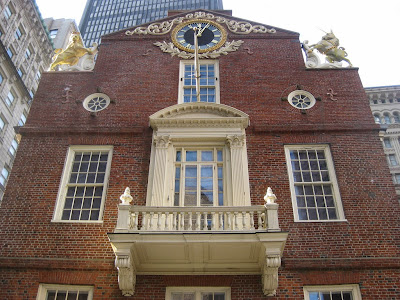 Actually, the lion didn't eat anything. The lion is the gold statue, which, along with the silver unicorn, were removed from the Old State House in Boston for cleaning and repair. When the two statues came down in September, it was rumored that there was a time capsule inside the lion.

Last week the capsule was opened, and its contents, placed inside in 1901, were revealed. Read about what was found, here.

If you're interested in the period during which the time capsule was filled, early 1900s Boston, let me suggest a few of the "Images of America" series books of old photographs:

Sammarco, Anthony Mitchell. Boston: A Historic Walking Tour. [on order, but a copy is available through GMILCS]

Photo by Mikkashar.
Posted by KURIOUS KITTY at 9:00 AM