Adventures in connections? Let me explain: tomorrow is the anniversary of the birth of Lucille Ball of I Love Lucy fame. She was born on August 6, 1911--105 years ago. I thought I might find a poem about Lucille Ball, or I Love Lucy, since she and the sitcom were such a notable part of post-WW II popular culture. I always check first the Poetry Foundation website search feature, but found nothing directly related to Lucille Ball.

A general search at Poetry Foundation for the term "Lucy," led me to a poem by Ben Jonson called, "To Lucy, Countess of Bedford, with John Donne's Satires" Its opening and closing lines perfectly fit Lucille Ball with her red hair and comedic genius:

Lucy, you brightness of our sphere, who are
Life of the Muses' day, their morning star!

I also found a number of poems written by a poet named Lucy Eddy (1863-1931). Several of which are found in the February 1918 edition of Poetry: A Magazine of Verse. Included is this: 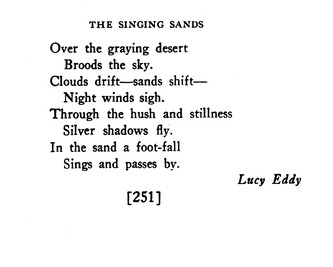 "In the sand a foot-fall/Sings..." Led me to wonder if the song of a desert's singing sands is the same as the song of Manchester-by-the-Sea Massachusetts' Singing Beach. And that in turn led me to this short video for those who have never been to the Singing Beach.

Not a straight path to a blog post, but I hope you see the connections. Half the fun in getting there is in the trip itself!

This week's Poetry Friday Round-Up is being hosted by Tara at A Teaching Life.
Posted by KURIOUS KITTY at 12:00 AM