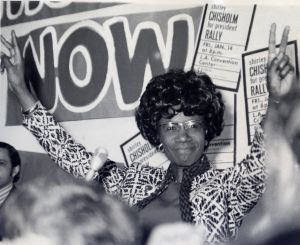 As a birthday remembrance, I've taken several of Chisholm's quotations and mashed them together to make this "found poem":

There is little place...

for an independent
creative personality

Anyone who
takes that role

must pay a price.

Be as bold as
the first man
or [woman]
to eat an oyster.

If they don't give you
a seat at the table,
bring a folding chair.

Sorry, I don't have birthday cake to offer! But, there are plenty of poetry treats found today at Carol's Corner.
Posted by KURIOUS KITTY at 12:00 AM